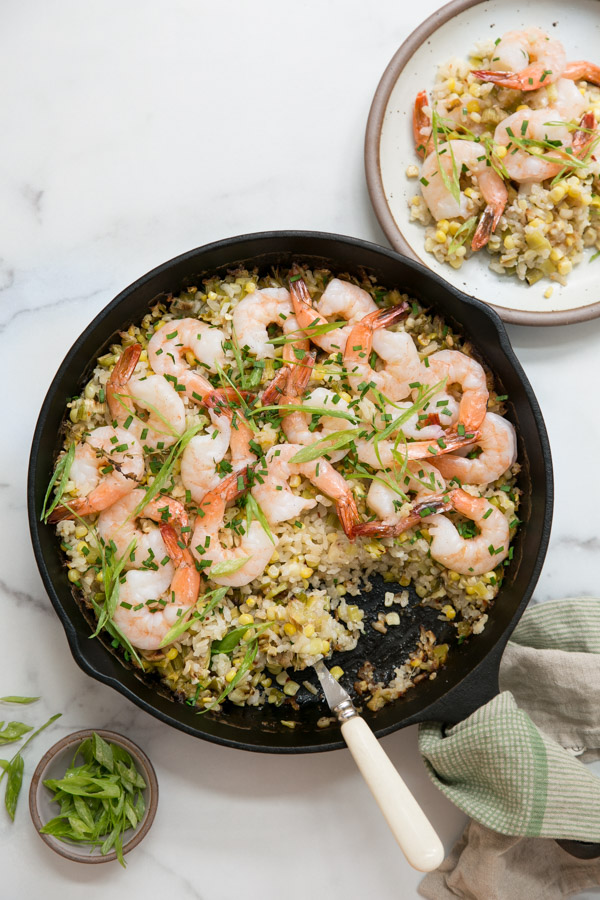 This shrimp casserole is baked in an ovenproof skillet and is made with leeks, corn (fresh or frozen), arborio rice, clam juice, coconut milk, and shrimp. It’s my favorite formula for a gluten free casserole recipe that’s ready in under 1 hour!

You’ve heard me say it many times about Chicken Rice Casseroles (CRCs), and this year at a higher cut than usual. There’s a lot to love: no stove work — it’s all thrown together in a mixing bowl and poured into a skillet. Many of my CRC flavor profiles are inspired by soups, but none of them actually require a can as a base.

I turn to this formula whenever I’m looking for new gluten-free recipe ideas, which often happens when I’m working hard on a new cookbook. And that’s exactly how I came up with this Seafood Corn Chowder-inspired Baked Shrimp Casserole.

Remarkably, I had never taken my gluten-free casserole recipe formula and used shrimp as the main protein and CHOWDER as the creamy canvas. For this shrimp rice casserole, I borrow this dairy-free corn chowder recipe—an old summer favorite. It uses coconut milk, fresh corn on the cob (although you can use frozen in the non-summer months), fresh leeks, spring onions, and thyme. (Don’t worry, I’ve offered some low-FODMAP tweaks in the recipe below.)

Can you make this baked shrimp casserole ahead of time?

The only difference between a CRC and an SRC is that the seafood cooks much faster than the rice, so you’ll have to add it later in the cooking process – easy. For that reason, this shrimp casserole recipe is a great meal ahead of time. Simply cook the rice until al dente, remove from the oven until ready to serve, top with the shrimp and dinner is ready in 10 minutes.

Can this gluten-free casserole recipe also be low-FODMAP?

This baked shrimp casserole can be customized to be low FODMAP. But if you want to avoid the hassle, check out this low-FODMAP shrimp recipe or this shrimp packet recipe that can also be low-FODMAP.

If you are simply looking for recipes without lactose, you can find more dairy-free recipe suggestions here.

Can you make this shrimp casserole recipe all year round?

Fresh corn is always a benefit, but you can easily make this casserole with frozen corn during the winter months, which isn’t too far from its peak deliciousness. I would avoid canned corn as it tends to be a little anemic.

This seafood corn casserole is extra festive during the holiday season. If you prefer a more succotash theme during the summer months, this shrimp rice casserole recipe is also delicious when you throw some diced zucchini or summer squash into the mix.

You can also add some chopped kale for more veggies. But I love serving this alongside a light salad with tartness to balance out the creamy base.

Finally, if you can’t find it at the store, you can use fish broth or regular chicken broth as a clam juice substitute.

Read on for this Shrimp Rice Casserole and Corn Soup, one of many easy shrimp recipes from my archives. And please leave your wishes in the comments for the next coming of the CRC or SRC!

With health and hedonism, 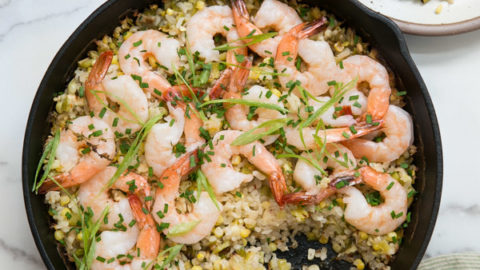 This shrimp casserole is baked in an ovenproof skillet and is made with leeks, corn (fresh or frozen), arborio rice, clam juice, coconut milk, and shrimp. It’s my favorite formula for a gluten free casserole recipe that’s ready in under 1 hour! The creamy (but dairy-free) chowder base is salty, sweet, and filling. You can easily make this year-round by tossing in frozen corn (about 2 cups). To make this low-FODMAP dish, reduce the corn to 2 cobs, omit the leeks, use only green scallions, and use less than 1 cup broth for half the coconut milk.

If you do, tag @phoebelapine and #feedmephoebe – I’d love to see it!