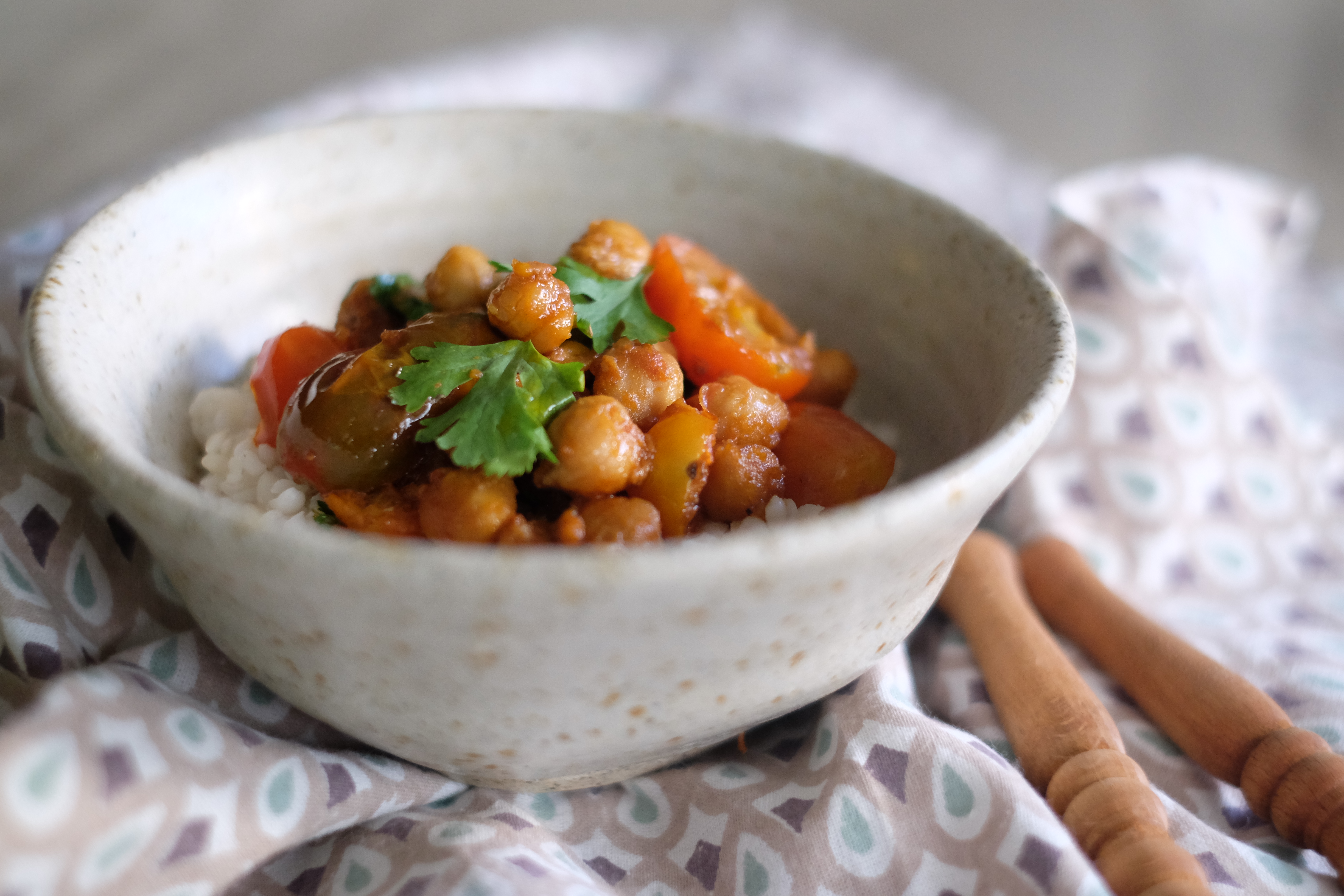 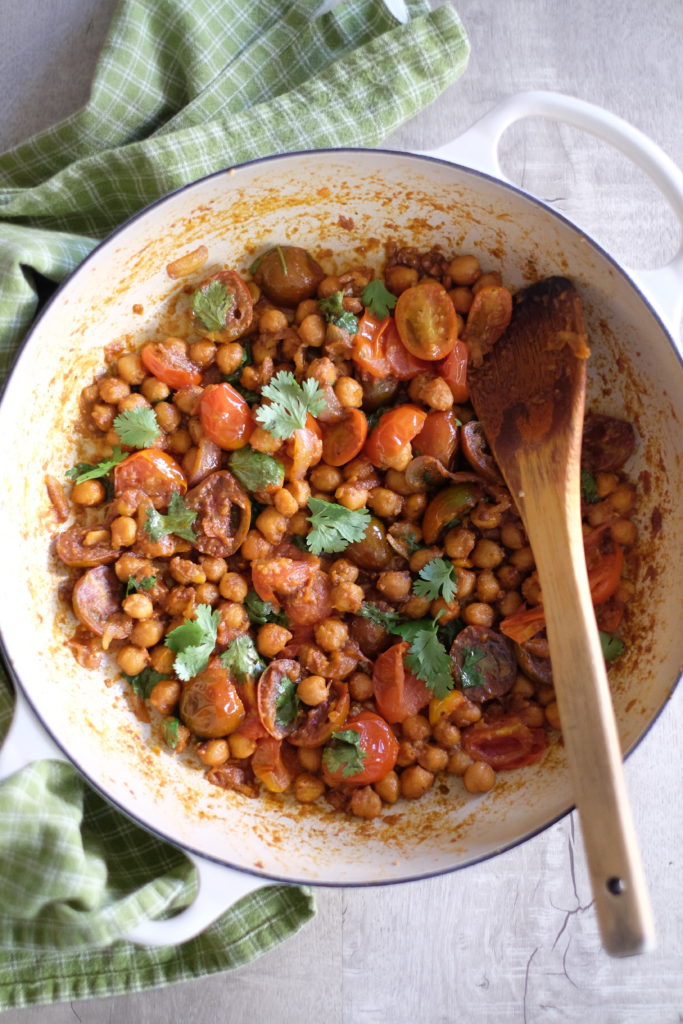 It’s funny how ideas can come from places that, at first, we don’t think likely. As in the line at the ATM (there are always a few long minutes!), or while looking at old family photos (we should go on vacation more often), or looking for leftovers in the fridge (so many good meals come from this highly scientific method believe me…).

And it was during one of these leftover forays that I discovered this dish.

It was after a shoot with tasty magazine, which always leaves us with a surplus of goodies in our fridge. Among the mess that is my fridge, I found the Cumin-Scented Mexican-Style Chickpeas from Mexican-Style Baked Sweet Potatoes (January issue of this year) and the leftover cherry tomatoes from the shrimp and cherry tomato stir-fry (April edition… the shrimp were gone!). In order to clean the refrigerator (although it helped that I love both chickpeas and cherry tomatoes) I threw the two together and the beginnings of this dish were born. 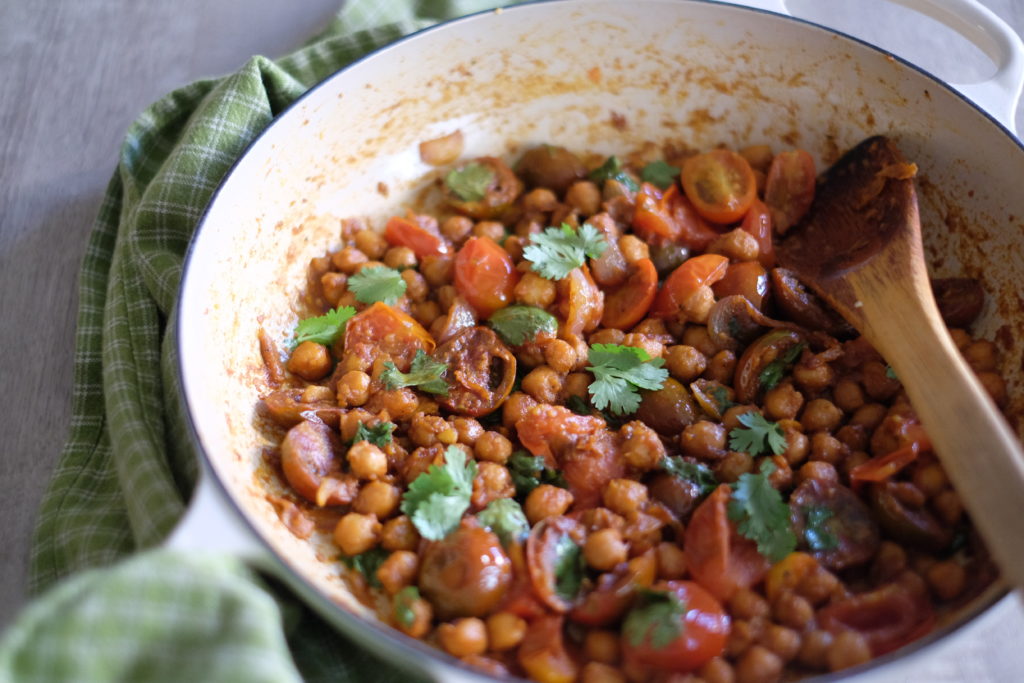 I was so happy with my resulting meal, prepared from these strange missing meals, that I told myself I would put together a recipe and share it here. This would make an ideal side dish for meat, poultry or seafood. On its own, though, thanks to the chickpeas, it already makes some tasty food.

This is, as far as I know, a completely vegetarian dish. Probably vegan, although I can’t say it’s vegan as I almost always wonder if there are hidden animal by-products in the ingredients I use, so let’s keep it vegetarian. 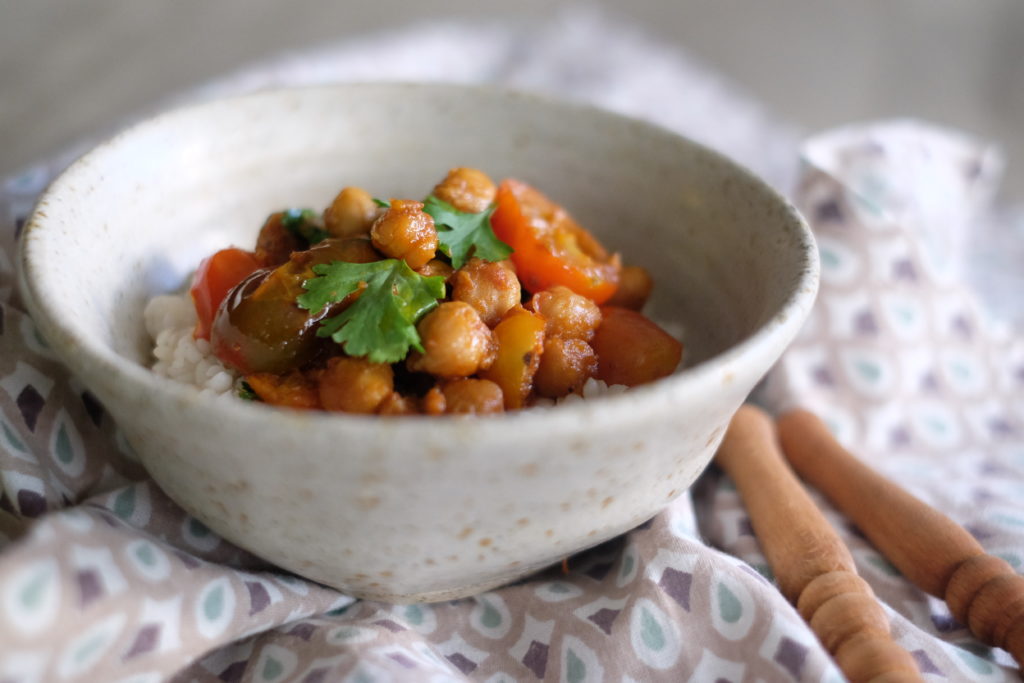 I’ve said before, that despite being a complete omnivore, and loving meat immensely, I am, in fact, a closet vegetarian. I love all foods, and that certainly includes vegetables. So it’s perfectly normal, despite my devotion to chicharon and bacon, that I make vegetarian dishes frequently, and think nothing of it. And I really liked this one in particular (not at all because I was also able to clean out my fridge a bit in the process) that I have made a couple of spin-off dishes with it. All vegetarian (although not vegan as there is yogurt and cheese and yogurt).

But first, the main recipe… 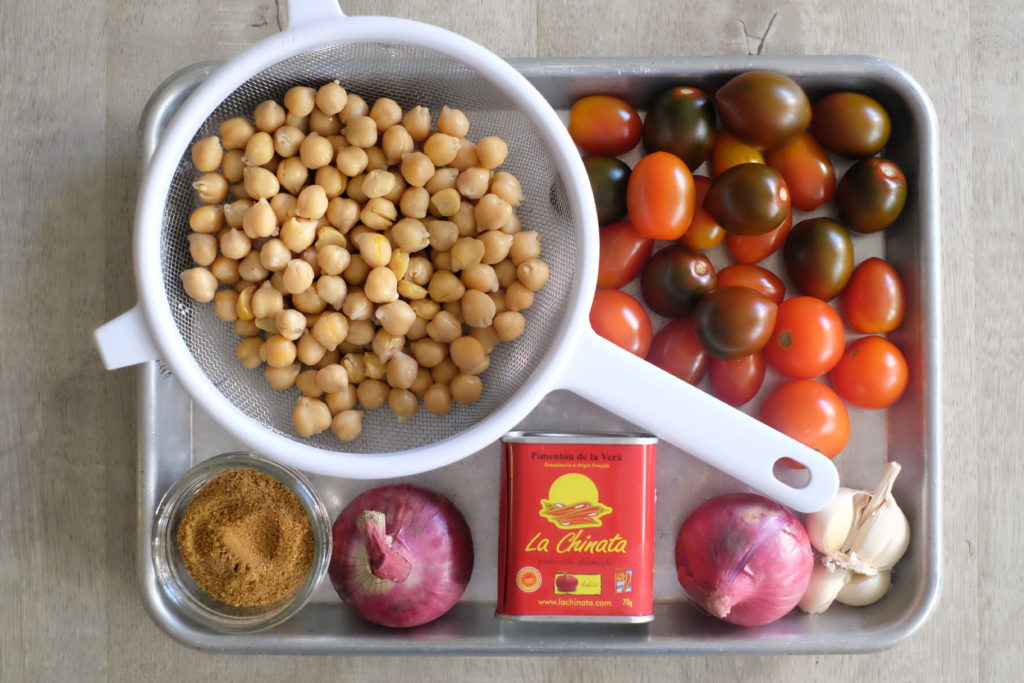 – Put a pan on medium-high heat. Add a couple of generous drizzles of olive oil. When the oil is hot, add the onions. Saute and stir until the onion is soft and translucent. Add the garlic and cook until the garlic is fragrant but not roasted.
– Add the chickpeas and throw in the onion oil. Fry for a couple of minutes and then add the cherry tomatoes and stir. Add the cumin, smoked paprika, salt and pepper to the pan and toss to distribute the seasonings evenly.
– Saute everything, stirring occasionally, until the tomatoes are a little sunken and wilted but still hold their shape. This shouldn’t take long.
– If the pan seems too dry, stir it with a little water. It should be moist, but not juicy.
– Remove from heat and enjoy!

As mentioned above, you can have this as a side dish or on its own. It already has protein, thanks to the chickpeas, and if you want to add some leafy greens towards the end of cooking (like spinach) you can do that too. I used cumin and paprika to flavor it since the original chickpeas were flavored, but you can also change it up with your favorite spices (I think this would be great with some garam masala too!).

I wanted to give you an idea of ​​how versatile this dish is by showing you some totally vegetarian ways to serve it (hello vegetarian friends!).

You can simply serve over a bowl of your chosen grain. I had it here with adlai, but you can have it with any kind of rice, barley, quinoa, or a combination of these. You can also make it with couscous or pasta. A few hot sauce shakes wouldn’t go amiss here. 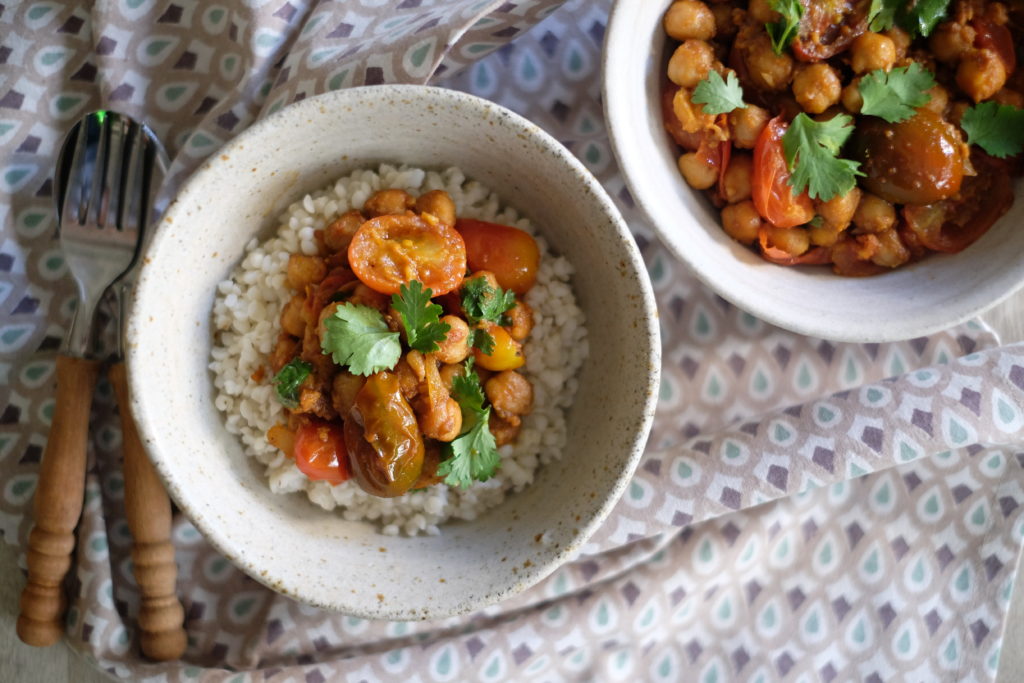 You can also take the “grain bowl” idea and run with it, adding other elements to make it a hearty and super tasty meal. Here I take the bowl of adlai and add guacamole, herb garlic yogurt, chipotle tabasco, cilantro, green onion and a squeeze of lime. You won’t even miss the meat, and that’s coming from a carnivore so you know it’s true. 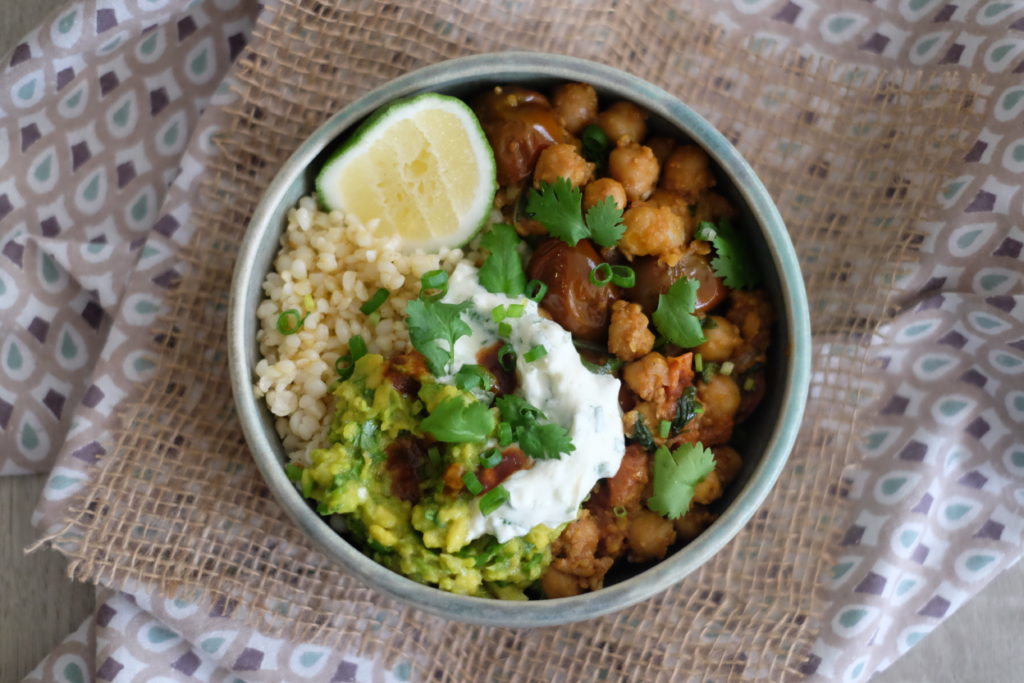 You can also pile it on top of a round of pita bread and add some veggies (here with wild arugula and coriander), crumbled pieces of white cheese (white cheese, feta and chèvre would go well), and some chili flakes. You can also do the same with an omelet and roll it up before eating. 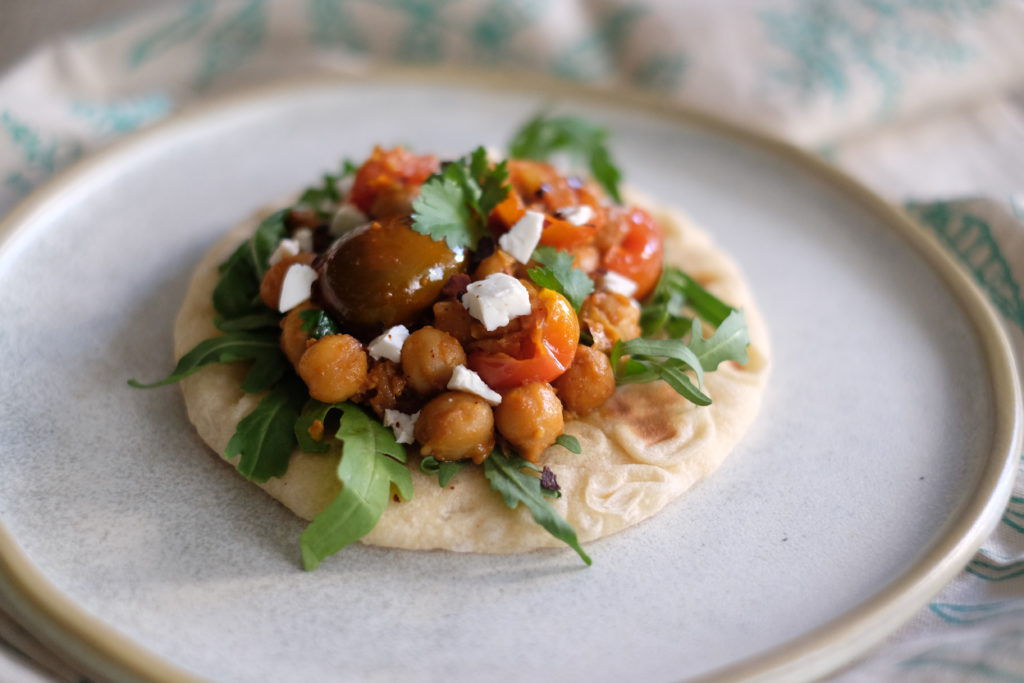 I love finding new ways to use, and really enjoy it, leftovers You could even say it’s my project. If you follow me Instagram you will see my attempts with the hashtag #fightfoodwaste. As I’ve said many times before, your next great meal could already be waiting in your fridge!

And, in the same vein, yours next big idea it could also be hidden in the most unlikely of places…or, perhaps, even in plain sight.