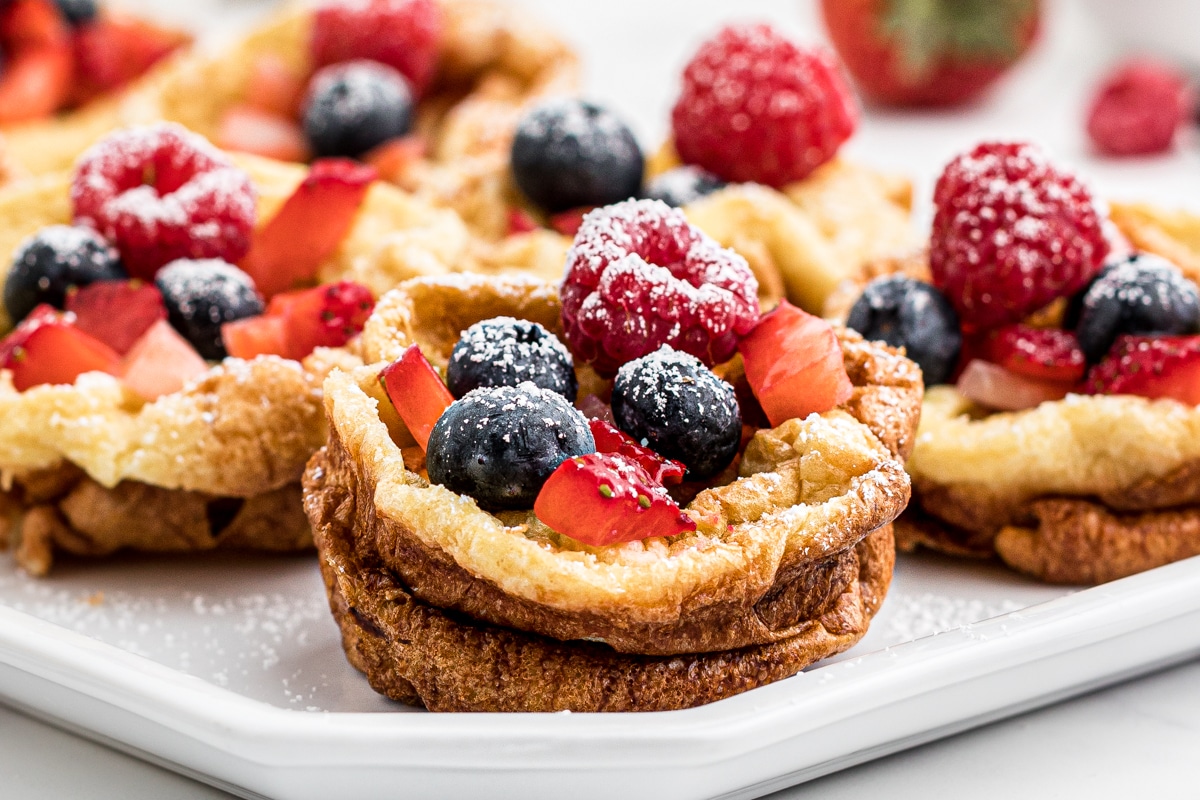 Popovers are light, hollow, and absolutely delicious! Learn how to make them with my easy to follow recipe.

This is a recipe my mom has been making since I was a child. When she made them, we all looked forward to seeing them rise in the oven.

Popovers are a type of pastry made with a simple batter of eggs, milk, and flour. They are often served with butter, jam, and other sweeter toppings like fruit. They resemble and are sometimes referred to as Yorkshire pudding, a traditional English dish usually served as a side dish with roast beef.

These popovers are a great source of protein and when loaded with fruit make a delicious full breakfast!

What is the difference between Yorkshire Pudding and Popovers?

How to make popovers

To whip up these delicious popovers, all you need is about 10 minutes, a blender, and a few ingredients.

What are the secrets of amazing popovers?

Can I use a muffin pan instead of a popover pan?

Should popovers be emptied?

Popovers are meant to puff up as they bake, forming a large hollow center. However, as soon as they come out of the oven, they begin to deflate and collapse. This is normal and to be expected as the popovers begin to cool, the steam escapes and the structure of the popover begins to deflate.

Why aren’t my popovers bloated?

Can popovers be created in advance?

Popovers can be made ahead of time, but they’re best served fresh and warm from the oven. If you make them ahead of time, the texture and appearance may not be as good as freshly baked.

You can make the popover batter ahead of time and keep it in the fridge for up to 24 hours. Be sure to give the batter a good stir before using, as the ingredients may settle.

Chilled dough will take longer to rise and may not be as light and airy as dough that has been brought to room temperature before baking.

Can popovers be frozen?

Popovers can be frozen, but they’re best served fresh from the oven. If you want to freeze them, you can freeze the baked popovers for up to 2 months.

To freeze popovers, first let them cool completely. Then either wrap each popover individually in plastic wrap or place in an airtight container or resealable bag.

When ready to serve, remove the popovers from the freezer and place in a 350 degree Fahrenheit oven to warm up for a few minutes. Keep in mind that reheated popovers won’t have the same crunchy texture as freshly baked ones.

Another option is to prepare the dough, refrigerate it for up to 24 hours, and then bake it when you’re done.

I am a Registered Nutritionist, mother of 4, an avid food lover and a strong promoter of healthy habits. Here you’ll find lots of delicious fruit and veg-packed recipes, tips on how to get your kids to eat better and become intuitive eaters, and plenty of resources to feed your family.